Tales From Another Stage

"Storytelling, vibrant and visceral - something you haven't heard before."

“I have seen few master storytellers, of which Mr. Rousseau IS one who can create such a vivid mood and hold that mood for an entire show...﻿we need these people to remind us that yes, the human condition can become dark and one can lose ones way, but if you just keep going, some sense can be made of it all in the end. You just got to hold on and hope for the best but be ready for the worst."

“The way he tells a story is like sitting with your grandfather while he reminisces about the past, and you always ask for more."

﻿"Richard is an excellent actor, storyteller and writer with a lifetime of experience to hone his craft. He took me on a journey where I laughed deep belly laughs, cried a little and felt deep compassion for this actor in his dark days.﻿..Treat yourself and your friends to this master storyteller and actor. He has a deep wisdom and a great sense of fun too!﻿"

"Richard Rousseau's atmospheric, imagistic storytelling has always drawn me in...meticulously crafted, Richard's storytelling reached in and tugged me where I live. Deeply affecting. If you've been wandering around wondering what to do with your life, see this one.﻿"

"Crazy, magical figures with profound advice are a staple in Richard's stories, and I believe they will continue to appear until Richard finally owns his place in the pantheon."

﻿"Holding my attention at 10 o'clock on a Friday at the end of a long week is something of a Herculean task. Richard Rousseau accomplished that feat.”

"Why do I consider Richard Rousseau the best storyteller I've ever seen? His ability to craft a story line is a big part; even with expectation, it is a joy to watch a fun and random story suddenly become anything but random and something more than fun. Another part is performance skills; anyone who wonders why I whine a lot about script-stands (and I do) need only watch Richard Rousseau. Only by directly engaging the audience do you get that kind of pop and impeccable timing. But best of all, Richard's stories are imbued with a simple humanity that quietly carries far more power than seemingly grander topics.﻿"

"If Rousseau or Lingo told me they were telling stories in a Dumpster on a hot July night, I'd go."

Article from the Highland Villager﻿ 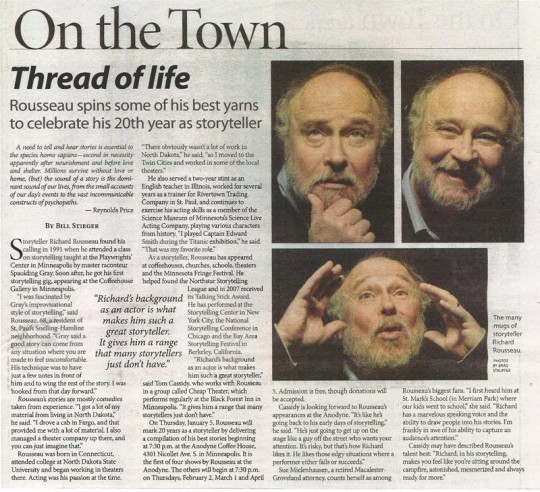